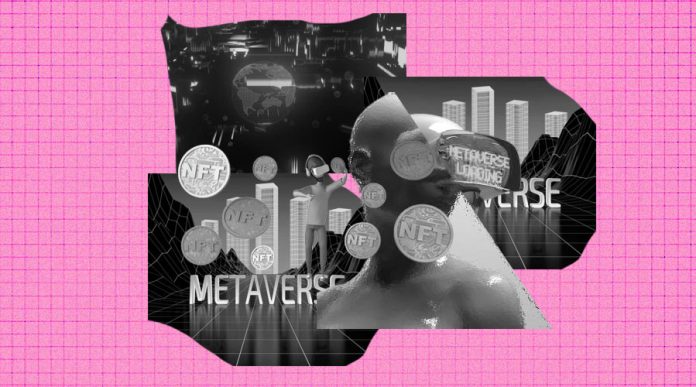 Non-fungible tokens (NFTs) and the metaverse are two of the current hottest sub-sectors in the crypto markets. The opportunities are immense and exciting for both users and investors. In this article, we’ll consider some of the top NFT metaverse gaming cryptocurrency trending now for investors to consider.

1. Lucky Block (LBLOCK)
LBLOCK tops our list of the best NFT metaverse gaming cryptocurrency. The digital asset, which underpins the Lucky Block gaming ecosystem, has been one of the most exciting coins in the market.

Lucky Block is a blockchain gaming platform that uses its LBLOCK token as a gateway into its gaming ecosystem. Investors can buy Lucky Block and enjoy access to the games in the ecosystem. At the same time, LBLOCK is also available as a tradable asset.

The Lucky Block ecosystem also includes the NFT collection, otherwise known as the Platinum Rollers Club NFT collection. Launched in February 2021, the collection is part of Lucky Block’s marketing strategy. There are 10,000 pieces in the collection, each of which mints for $1,500. Buying one of the NFTs awards investors an opportunity for 10% royalties on each sale.

This month, Lucky Block’s developers launched an NFT draw for community members, giving away $1 million in rewards. The platform is also expected to offer more draws, providing an incentive for investors to buy these NFTs.

As Lucky block continues to gain popularity, we believe this collection will also surge. All of these are good signs for LBLOCK.

2. Axie Infinity (AXS)
Coming next on our list of the NFT metaverse gaming cryptocurrency is AXS – the native coin for Axie Infinity. AXS is one of the most popular cryptocurrencies in the market. Axie Infinity, which revolves around digital pets called “Axies”, has seen its profile rise significantly in the past year.

With Axie Infinity, players battle their Axies with other players. When they win a battle, they win the other player’s Axie – which is an NFT – and AXS tokens. Axies can be sold for money in the Axie Infinity marketplace, so there are several earning opportunities with this game.

Currently, the Axie ecosystem is going through a bit of a reshuffling following the security breach of the platform’s Ronin bridge earlier this year. The network reportedly lost about $600m to cybercriminals. Sky Mavis – Axie’s developers – have now announced a plan to relaunch the bridge and reimburse the victims.

Bridge being refilled on the 28th 🤝

If you are a game developer who wants to build with the most experienced team in the web3 gaming space reach out to partnerships@skymavis.com$ron $axs https://t.co/DPkg8DUeUW

Despite the hack, there’s still a lot of value left in the ecosystem. We believe that AXS is one coin investors should keep an eye on as the market flips bullish.
3. Decentraland (MANA)
Decentraland is a highly popular gaming ecosystem where players can purchase virtual land for money. When you sign up, you get to buy LAND – NFTs representing your ownership of virtual land in the plot – with Decentraland’s MANA token.

MANA trades at $0.92. The asset is up by 2% in the past week, showing a correlation with the market.

Given the importance of this asset to Decentraland, it has also grown to become one of the most valuable cryptocurrencies in the market right now. And, things will only get better going forward.

Recently, California-based internet giant Yahoo! announced a spate of events in Decentraland, cementing a partnership between both platforms.

The platform’s native MANA token is used to buy LAND. MANA has undoubtedly become popular in the market, thanks to Decentraland’s partnership with several top brands. As time goes on, we believe that this spate of partnerships will bolster MANA even more.
4. The Sandbox (SAND)
The Sandbox operates similarly to Decentraland. However, while Decentraland focuses more on land ownership, The Sandbox has become a sprawling ecosystem where people can band together to engage in multiple, diverse experiences.

As a virtual world, The Sandbox allows participants to come in, create avatars, and access different shared environments. It has so far inked several partnerships this year to bolster its ecosystem, and it added another feather to its cap last week.

One of the world’s premier media companies, TIME Magazine, recently partnered with The Sandbox to build a replica of Time Square on the platform. The partnership will also include TIMEPieces – the NFT arm of Time.
5. Enjin Coin (ENJ)
Another impressive entry on the list of NFT metaverse gaming cryptocurrency is ENJ – the utility token for the Enjin NFT platform. Built on Ethereum, Enjin allows individuals and companies to mint and trade their NFTs. The layer-two protocol allows users to access Ethereum’s resources without encountering the blockchain’s scalability issues.

Despite being built on Ethereum, Enjin has been working on expansion. The service launched Efinity – a parachain for the Polkadot blockchain – in March, housing over 100 blockchain games.

Enjin’s developers are also looking towards an entry into the metaverse, so the future is undoubtedly bright.
6. Theta Network (THETA)
Rounding out the list of best NFT metaverse gaming cryptocurrency is THETA. The asset underpins the Theta Network – a new-generation blockchain platform for video streaming. With Theta, developers can build decentralised applications (dApps) for video streaming. The platform also allows users to mint and sell NFTs.

The partnership is expected to further bolster Theta’s reputation as a home to NFTs.
Conclusion – 6 NFT Metaverse Gaming Cryptocurrency Trending Now July 2022
NFTs and the metaverse remain important parts of the crypto and tech spaces’ future. Above, we have outlined cryptocurrencies with huge potential as these spaces continue to grow. However, our recommended top NFT metaverse gaming cryptocurrency to buy for returns is the Lucky Block NFT token.