Home Investing At this year’s NYFW, crypto and Web3 take the spotlight in the... 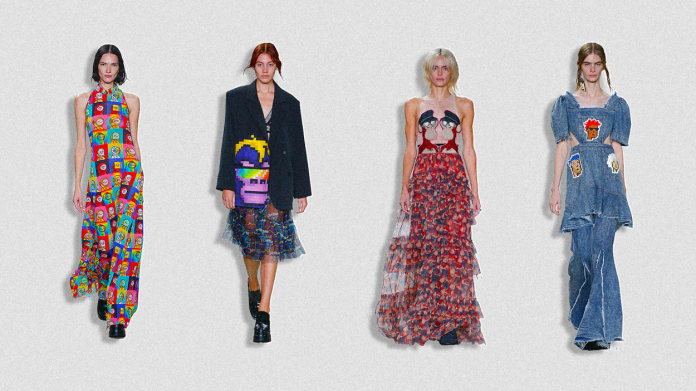 For the second time since the global pandemic, New York Fashion Week has dawned upon the city, bringing a flock of cascading black fabric, billowing sleeves, and sky-high stilettos to the streets of Lower Manhattan. Models drape themselves around town, Perrier water flows, and the glitterati party like it’s 2019; yet, vestiges of the pandemic hide in the crevices. After two years in a digital void, something in the culture has shifted—and this time, NFTs, the techno-pandemic darling, are taking center stage.

Multiple runway shows pay homage to Web3, and like most fashion statements, it’s the opposite of subtle. Designer Tommy Hilfiger’s show was billed to blend the real world with the metaverse, a mashup he bizarrely branded as “phygital” (physical meets digital). The production—staged at a drive-in movie theater in Brooklyn—was livestreamed in Roblox, where avatars wearing renderings of the outfits strutted through a virtual cityscape. Viewers could purchase real-world versions of the clothing within the game. Meanwhile, customers who purchased from Alo Yoga’s Aspen skiing-inspired collection also received NFTs certifying ownership of the clothing.

But nowhere were NFTs more striking than in Vivienne Tam’s show, which took place on the border of New York’s iconic but distinct Soho and Tribeca neighborhoods. Much like how the designer’s clothing has always stood at the crossroads between East and West, the collection now, dramatically, revels in that ethereal space between the physical and the virtual. Up the elevator and onto the sixth floor of Spring Studios, electronic music plays as blocks of colored pixels flicker against the wall. Underneath the spotlights, a couple of guys loiter, wearing headgear shaped like CryptoPunk NFT avatars of human faces.

For her show, Tam has partnered with First Digital Trust, a Hong Kong-based cryptocurrency custody service; Gemini, the cryptocurrency exchange platform founded by the Winklevoss twins, Tyler and Cameron; and the NFT project CyberKongz, which is currently selling for a minimum of $25,000 on OpenSea. Her clothing features the CyberKongz monkeys and other blue-chip collections, including CryptoPunks and the Bored Ape Yacht Club, in various fashions: bold earrings, patches on a denim jacket, the bodice of an evening gown. Their likeness is impossible to miss.

For Tam, that’s by design. “I want to bring the worlds of art and NFTs together,” she shares from backstage at the runway, noting that storytelling is at the heart of both spheres. “For people in NFTs and the metaverse, I want to show that the physical world is important, too,” she says. In particular, IP owners and creators benefit when people are wearing physical manifestations of their avatars.

Contractually, Bored Ape Yacht Club and CryptoPunk NFT holders own the IP rights for their avatars—meaning, that to feature the unique illustrations of apes and punks on her clothing, Tam had to work with individual NFT holders who licensed the images out to the designer and her team. A group of so-called whale collectors, who hold dozens of NFT properties, allowed Tam to elevate their avatars to the realm of high fashion.

Other Tam clothing featured Awkward Astronauts, an NFT collection sold on Nifty Gateway, the NFT trading platform owned by Gemini. “The more we can intersect NFTs with fashion, art, and different creative communities, the better,” says Cameron Winklevoss, who attended the show with his twin. “It’s super early, but NFTs are here to stay . . . and there are all kinds of dimensions to go in,” he adds, musing that NFTs could also offer ticketing for the very event we’re at.

Another shirt makes its way down the runway with a sparkling “First Digital” logo emblazoned on the back. According to the company’s CEO, its custody service will help users who buy NFTs of Tam’s clothing in the metaverse translate that purchase into a real-world order, offering more Web3 functionality in fashion.

According to Tam, her collection also embodies the spirit of traditional Chinese mah-jongg, which she likens to NFTs as “it’s about intelligence, and playing the game as much as winning it.” When they see her NFT-inspired clothing, she says, “I want [people] to be excited and think, ‘Wow, they’re alive!’ That brings me joy.” 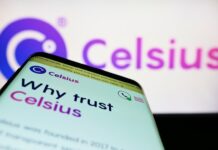 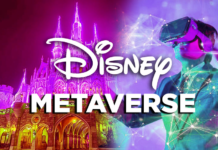 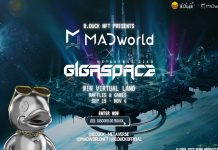