Home NEWS Barcelona plan to create own cryptocurrency and intend to launch own NFTs... 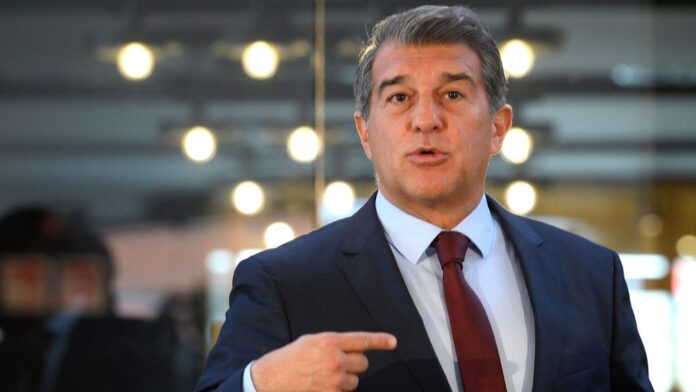 Barcelona are planning to create their own cryptocurrency and launch a range of NFTs (Non-Fungible Tokens), club president Joan Laporta has confirmed.

A number of cryptocurrency companies have approached Barca over a potential partnership since Laporta’s re-election in March, 2021.

The Camp Nou chief says they have rejected those advances in favour of developing their own in-house digital currency, and has stressed the importance of being “imaginative” in order to generate additional revenue outside of football.
What’s been said?
Laporta outlined his vision at the Mobile World Congress in Barcelona this week, with the club now taking steps to create a metaverse filled with digital assets unique to the Blaugrana brand.

“We’re developing our own metaverse, [which is why] we rejected the chance to be associated with any cryptocurrency enterprises,” said the 59-year-old.

“We want to create our own cryptocurrency and we have to do that ourselves. We are different because we survive financially from what we can generate through the industry of sport.

“We do not have big corporations or shareholders behind us. That forces us to be imaginative, innovative, brave and be a step ahead in many areas that surround the sports industry.”

Barca eager to tap into international market
Shortly after Laporta’s return to Camp Nou, Barca posted record-breaking debts in excess of €1 billion, and have since had to offload a number of first-team players in order to reduce their wage bill – including all-time top scorer Lionel Messi.

The Blaugrana are now exploring ways to monetise the supporters that follow the club across the globe to boost their financial position, with Laporta adding on their cryptocurrency venture: “It’s something we can share with our fans around the world — around 300 million of them. I could announce something else, but I have to be prudent because it’s confidential still.

“The players know what we’re working on, that this is a modern club that makes use of new media. There are clauses in their contracts related to the NFT world and the metaverse.

“We want to generate new opportunities for growth. Our goal is to win titles and to make our fans happy, but we also have to profit from opportunities in the sports industry.

“It is a matter of survival.”