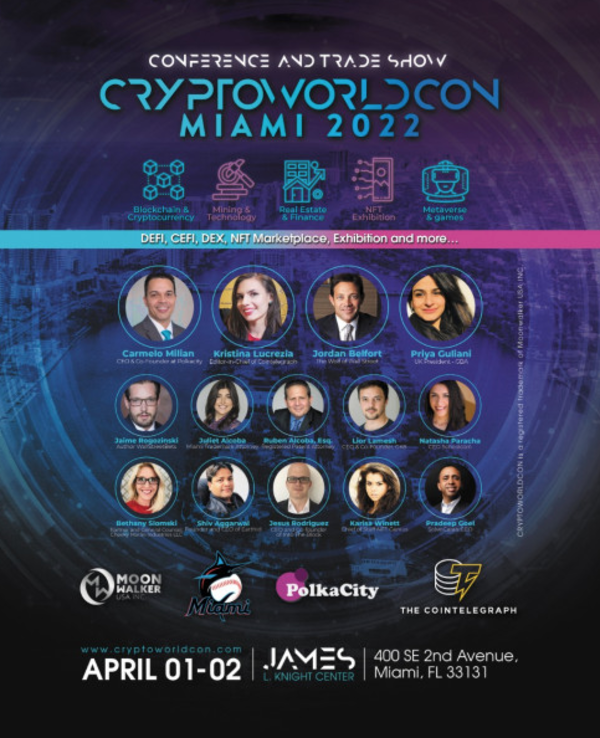 MIAMI, March 02, 2022 (GLOBE NEWSWIRE) — With less than 30 days away, CryptoWorldCon (CWC), the event of blockchain technology and cryptocurrencies focused on cutting-edge schemes and trends in the blockchain market, will kick off Miami’s BitCoin Weekend April 1-2, 2022, held at one of Miami’s most prominent and renowned venues, the James L. Knight Center. This event comprises high-profile individuals, companies, investors, and organizations that will create an international impact, converting Miami into the epicenter of the blockchain and cryptocurrency community.

CryptoWorldCon will provide industry leaders, influencers, and innovators to present individually or speak as a panel. In addition to its valuable speakers, CryptoWorldCon will have a special guest of honor who will be realizing the inaugural pitch at the Miami Marlins game on March 31, where CryptoWorldCon will be present with an Ice Breaker event for all its VIP attendees, and joining an international list of world-class speakers from around the globe such as:

Partnering with world-class speakers from around the globe such as:

Hosted by Award-Winning Master of Ceremonies Paul Gamache and moderated by NASDAQ columnist Naeem Aslam, the event will present itself as the perfect networking opportunity for brands and businesses with both potential B2B clients as well as a direct target audience, making it the perfect platform to grow a business.

CryptoWorldCon will include panel discussions, speaker sessions, workshops, a job fair for developers, a contest for startups to select by a jury of its keynote speakers the most innovative project in an early stage, and events that will help attendees learn more about cloud & enterprise computing, the role of blockchain in elections, the influence of blockchain industry in-state operations, the potential adaptation of cryptocurrency by major financial institutions of the world, and the benefits of blockchain for multinational firms and franchises.

The event will close on April 2, with an exclusive yacht dinner on the luxurious Sea Fair Yacht, overlooking Miami, which will also include an exclusive award ceremony that will include the recognition of the selected startup as the most innovative project to look for, as well as for the partnerships established during the event.

A game-changing experience, the entire event is going to be filled with activities that will further improve the knowledge and network experience of the attendees. CryptoWorldCon presents a careful selection of speakers designed to spice up the CWC discussion panels, making the entire event a very engaging interaction with a variety of value-added strategies, opportunities, and mentoring for the attendees.

For startups looking for investors and strategic partners, this is the place to be. Join “la crème de la crème” of preselected startups that are going to present their projects using storytelling and audiovisual tools and participating in a very tough competition where only the best is going to be recognized and awarded in different categories.