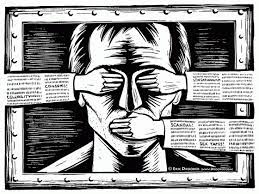 Technology companies have built monopolies through social media platforms and have asserted their censorship authority to violate the First Amendment and force their “personal” beliefs on the public. Big tech should be liable for how it censors people’s freedom of speech. Traditionally, in the U.S., the majority has understood it as wrong to marginalize the minority. Still, recently, it has felt as though with the rise of social media giants such as Facebook, Google, Apple, Twitter and Amazon, social media has been working to conform its users and content creators to what they deem “objectionable” or politically correct.

What gave big tech companies so much power was Section 230 of the Communications Decency Act, which was created after a law firm sued an internet service provider for a user’s post moderated by the internet service provider. That law firm was able to sue them because they moderated the post. Congress then created Section 230 to protect internet companies and spur growth in the developing sector. The first part of Section 230 asserts that interactive computer providers are not liable for what their users post. This part was meant to protect freedom of speech. The second part of Section 230, according to the U.S. Government Publishing Office, states that “any action voluntarily taken in good faith to restrict access to or availability of material that the provider or user considers to be obscene, lewd, lascivious, filthy, excessively violent, harassing, or otherwise objectionable, whether or not such material is constitutionally protected,” protecting site moderators from being sued. Initially, this was seen as an enabler for social media to let free speech thrive on their platforms while still regulating it for platform optimization, but it also allowed social media companies to edit content however they want, since they now aren’t responsible for what they edit.

The free market should reign supreme, and tech companies should be granted protection from their users’ posts and the ability to moderate content to an extent for optimization purposes, but the problem appears with the subsection in Section 230 that states these companies can censor what they deem, “otherwise objectionable, whether or not such material is constitutionally protected,” according to the U.S. Government Publishing Office. With the internet increasingly becoming the preferred medium of communication and social activity, the ability of companies to encroach on people’s constitutional rights is increasingly becoming a problem. Paired with immunity from anything content users create on their platform, the section grants the ability to let almost anything happen on their site but also censor content at will.

Social media companies have abused their powers of censorship and immunity to cater to pop culture. There are many examples of this, but the ones we hear about the most concern political viewpoints. “The tech industry has long leaned left,” according to CNBC, and a consequence of their immunity seems to have been to silence right-wing politicians, like when Twitter permanently suspended President Donald Trump’s social media accounts or when Amazon kicked Parler off their web servers, or when Senate Majority Leader Mitch McConnell’s Twitter account was frozen for posting a video of people shouting violent threats outside his home, according to The Freedom Forum Institute. The Freedom Forum Institute asks: does social media have the right to silence the U.S. Government? We only seem to hear about these censorship issues in mainstream news when it happens to famous people. Still, the real consequences are how it affects the populace and whether it is not always as extreme as a ban, but maybe some content in the algorithm that caters to certain opinions is pushed over other content.

Social media is a business, so it should be regulated as a business and should not be allowed to discriminate or violate freedom of speech. The companies should be held to the same rules as the rest of the U.S. and only censor the type of speech that freedom of speech does not protect. A simple way to accomplish this would be to take out this section from Section 230 (U.S. Government Publishing Office): “otherwise objectionable, whether or not such material is constitutionally protected.” People’s constitutional rights that uphold American Democracy will be rendered obsolete if the big tech corporations, which are active in almost all of our daily lives, are allowed to disregard them.