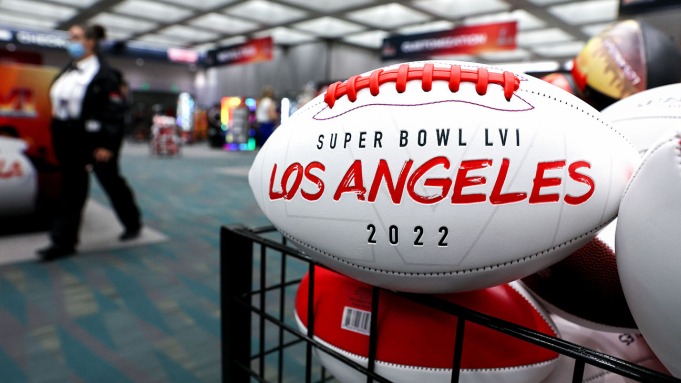 From party sponsorships to Super Bowl commercials, crypto is officially crashing this year’s festivities in a major way: “It’s almost like the crypto wars and everyone felt a need to show up at the Super Bowl.”
Want to party like a rock star in Los Angeles?

Ahead of Super Bowl LVI, there are more options than ever to live large inside the swirl of red carpet events and concerts that surround the big game. The days leading up to Feb. 13’s Super Bowl — a matchup that pits the home team Los Angeles Rams against the Cincinnati Bengals inside SoFi Stadium — are filled with enough party amenities to make any high roller salivate.

Of course, there are typical accessories like bottle service and backstage passes to take advantage of while A-list artists Drake, Justin Bieber and Miley Cyrus hit stages across the city. But a scan of this year’s Super Bowl party schedule compiled by The Hollywood Reporter reveals new trends like over-the-top helicopter packages, metaverse gatherings, and NFT and bitcoin giveaways. As further proof that the crypto craze has officially crashed the big game, a slew of events are sponsored this year by cryptocurrency exchange platforms like Crypto.com and FTX, with another backed by MALÏBU, the proprietary crypto acquisition concierge service.
Lou Frangella, vp partnerships for FTX, a presenting sponsor for Friday night’s Shaq’s Fun House at Shrine Auditorium, says his company’s decision to have such a big footprint this year is a way to broaden the user base. “We’re still in the early stages of crypto adoption, and FTX wants to continue to be a helpful resource and thought leader for the future of finance. The Super Bowl is the biggest stage to do that, so it’s not surprising to see how strong the showing of crypto will be,” he explains. “From being able to buy VIP tables with crypto through FTX Pay to NFTs being purchased by some of the legendary half-time performers — awareness, education and experiences around the Super Bowl will only help to further the excitement and understanding of crypto and blockchain technology.”

FTX is sharing the spotlight with acts like Lil Wayne, Zedd and Diplo and will be offering free NFTs for all attendees, crypto pricing and payment options, and a sweepstakes offer of $10,000 in bitcoin. There are also plush carnival prizes shaped like moons (an icon of the crypto set) and other bitcoin offerings inside, confirmed Joe Silberzweig and Adam Richman, who are helping steer the event through their production company Medium Rare.

“It’s almost like the crypto wars, and everyone felt a need to show up at the Super Bowl, the biggest week for sports in the world,” said Silberzweig, pointing out that the trend extends to the NFL. (The league is offering free NFTs with every Super Bowl ticket that are described as digital commemorative tickets.) “We sought out FTX because of their innovative partnerships and the way they work with celebrity ambassadors like Steph Curry and Tom Brady. It’s about working with them to improve an event and bring it into the 21st century.” Adds Richman: “Crypto and NFTs haven’t reached mass adoption yet among consumers, so what this event offers is the chance for many people to get their first NFT. What’s great about FTX is that they make the process of acquiring NFTs and crypto easy. You can download everything you need by scanning a QR code at the door.”

The craze for blockchain-based assets will also be featured during commercial breaks. Crypto.com and FTX are confirmed for coveted Super Bowl ad slots that are selling for up to $7 million for a 30 seconds. Last fall, FTX announced that it had partnered with NFL great Tom Brady and wife Gisele Bundchen to star in a new ad campaign, with a spot expected for the big game.

All of the above comes at something of a rocky time for crypto, as leading digital currencies Bitcoin and Ether have weathered steep declines of more than 20 percent in recent weeks. Though the market rallied late last week, uncertainty remains. As do critical voices, such as actor Ben McKenzie, who is writing a book about crypto and speaks out regularly against its popularity. “Celebrity crypto shilling is a moral disaster,” he wrote last year in a column for Slate with writer Jacob Silverman.

About that rock star life. Online sportsbook MaximBet is teaming with Maxim, its global strategic partner, for a pair of events powered by DirecTV (always a major host of Super Saturday Night festivities) that will be held downtown inside a custom 45,000-square-foot open-air pavilion. Headliners at the two-night affair include (among others) The Chainsmokers, Lil Baby, Gunna, 50 Cent and Tiesto. More than 3,500 are expected both nights, and a large chunk of those will be high rollers that have plunked down tens of thousands for VIP experiences that include private tables, artist meet-and-greets, VIP entrances and bathrooms, and complimentary food and drinks.

The transportation packages are where it really gets interesting. Deep-pocketed partiers can arrive in style with 15 friends in a choice of luxury vehicles (Range Rover Vogue, Rolls-Royce Ghost or Cullinan) or by helicopter. An offering called “Blades of Glory” includes three private helicopter transfers for up to five guests each that will pick up from designated departure points within 30 miles and drop off on a rooftop downtown near the venue. The ride may be brief but not dry: Guests can sip top-notch champagne and tequila like Jose Cuervo Reserva de la Familia.
From there, guests will be shuttled by sprinter vans to the events space, where the 15 revelers will get full VIP treatment and access. Tickets for the chopper packages go for $130,000 for Friday night and $145,000 for Saturday. If staying on the ground is more appealing, there’s even a package dubbed “Party Like a Rock Star” that goes for $120,000 for Friday night and $130,000 on Saturday. It features a private tour bus available for an eight-hour period, artist compound parking pass, one onstage table, artist guest passes for 15 guests, artist meet-and-greets, and unlimited food and beverages.

Doug Terfehr, a vice president of brand marketing for MaximBet who oversees events and parties, gives credit to events partner unKommon Events for creating “over-the-top, unforgettable experiences,” adding that their activations here are designed to align with the gridiron action. “There’s no bigger spectacle than the Super Bowl,” he explains, “and Los Angeles is the entertainment capital of the world, so the expectation is that there will be experiences you can’t get anywhere else.”

It’s also the capital of snarling traffic. Terfehr says that’s why helicopter packages are so appealing. Even those who stay on land will walk away with something: Terfehr confirms that they’ve teamed with Fanaply to provide an interactive NFT experience where all guests will scan a barcode and receive a limited-edition NFT poster and ticket stub tied to the event.

In addition, five winners will receive a rare NFT that will grant access to all Maxim/MaximBet parties for life or be exchangeable for commemorative apparel, free bets and other options. “It felt natural to include an NFT extension for an event that is so highly sought after,” he says. “It can’t feel like a regular weekend. The city of L.A. has been waiting for this for 30 years.”

Other highlights include a FLUF Haus event at the Petersen Automotive Museum. Per the invite, FLUF World, the collection of metaverse-ready unique 3D avatars on the Ethereum blockchain, is “bringing the community together for a one-night-only event merging tech, music, art and culture.” Snoop Dogg, who will have a big weekend as part of the Pepsi Super Bowl Halftime Show lineup, is a collaborator of the brand.
Saturday’s Big Game Big Give event, always a big draw for the philanthropy crowd, is taking its act to the metaverse by drafting Rob Lowe (or at least his avatar) to host the annual benefit. For every $1,000 ticket sold, organizers shipped a Meta Quest 2 VR headset to allow guests to attend the event and partake in a red carpet experience, avatar photo booth and social impact theater.

The latter is described as a virtual space where special guests can speak to other attendees and do performances (like spoken word). The centerpiece of the room is a virtual rose statue inspired by sculptor Michael Kalish. Rolling Stone, which always hosts a hot Super Bowl weekend party, will also feature a Rolling Stone cover hologram activation inside its event, held at Academy LA in Hollywood.

Even the Foo Fighters are going virtual. The iconic rockers will headline a post-Super Bowl virtual reality concert on Horizon Venues, a VR app available on Meta Quest headsets. The 180-degree VR concert will feature the band playing a song that has never been performed live before, as well as a set of rarely played tracks. The show is directed by filmmaker and music video director Mark Romanek.

Perennial Super Bowl advertiser Miller Lite is hosting its own virtual activation in the days leading up to the game. The venerable beer brand is opening “the first-ever brand bar in the metaverse” to coincide with its metaverse-inspired Super Bowl spot. Per official intel, wannabe patrons 21 and over are invited to partake in “an immersive, communal experience with interactive features like darts, billiards, photo booth, jukebox and more.” It opened on Feb. 7 and will be located in Decentraland, a 3D virtual world browser-based platform. To celebrate the debut, the Meta Lite Bar is passing out “limited quantities of exclusive wearable Miller Lite NFT swag” for registered Decentraland users with a crypto wallet starting on game day.

Sofia Colucci, global vp of Miller family of brands, says, “While many brands are showing up in the metaverse right now, Miller Lite is doing things differently by keeping one foot in the virtual world and another in the real world.” Just like everyone, it seems.