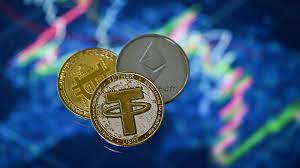 The recent news in May where certain people tried to exploit Tether (CRYPTO: USDT), one of the largest stablecoins, is a cautionary tale. In this video clip from “The Crypto Show” on Motley Fool Live, recorded on May 18, Fool.com contributors Jon Quast and Travis Hoium discuss some of the events that led up to this potential crypto crisis.

10 stocks we like better than Tether
When our award-winning analyst team has a stock tip, it can pay to listen. After all, the newsletter they have run for over a decade, Motley Fool Stock Advisor, has tripled the market.*

They just revealed what they believe are the ten best stocks for investors to buy right now… and Tether wasn’t one of them! That’s right — they think these 10 stocks are even better buys.
Jon Quast: That’s fair, Travis, and maybe this is a good point to go ahead and jump off in our conversation here to the stablecoin instability since TerraUSD’s (CRYPTO: USTC) decline, I’m going to answer your question with a bold statement here, Harry. I believe that what happened at Terra has completely and irrevocably broken the algorithmic stablecoin market.
Travis Hoium: That’s probably right.

Quast: Yeah. I think that the fundamental weakness, the chink in the armor has been exposed and people are now exploiting it left and right. Now, I believe that they tried to exploit Tether here. This is the largest stablecoin. It is the third-largest cryptocurrency period by market capitalization.

It actually lost its peg on the night of May 11, morning of May 12 dropping down to $0.95. This was something I was losing a little bit of sleep over, to be honest just watching this happen. It’s like, “Oh my goodness, what is going on?”

Hoium: Yeah. If this goes down, there’s a lot of cascading effects in crypto.

Quast: Indeed. I was looking at some data, there is a protocol called Curve and they have a pool that you’re able to swap one stablecoin for another and it’s supposed to be balanced perfectly between three stablecoins. Tether is one of those in the pool, and suddenly Tether spiked up to 90% of the pool in what it was saying was everyone was dumping their Tether in exchange for USD Coin (CRYPTO: USDC) and I forget what the other one, DAI (CRYPTO: DAI) was in there as well.

So it’s like why is everyone dumping their Tether all of a sudden? What’s going on here and people have questions, Tether’s reserves in the past, and as people were fleeing Tether, people were able to go directly to Tether and redeem their tethered tokens for one real dollar and so this is whether or not Tether has reserves to back up every single coin.

I think that that is what critics are still debating even after this. But they were able to redeem everyone who went to them saying, “I want to redeem. This is worth $0.95 on the exchange right now, I’m coming to you for my dollar,” they got it.