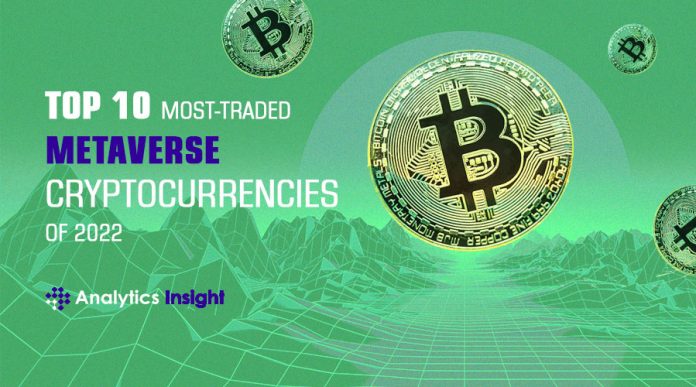 Decentraland
Decentraland defines itself as a virtual reality platform powered by the Ethereum blockchain that allows users to create, experience, and monetize contempt and applications. In this virtual world, users purchase plots of land that they can later navigate, build upon, and monetize. Till now, it is one of the top most-traded Metaverse cryptocurrencies of 2022.

The Sandbox
The Sandbox stands as a solid investment in March 2022 because it applied blockchain technology to a massive global market such as the gaming industry and is entirely focused on decentralization. The Sandbox is a virtual world where players can build, own and monetize their gaming experiences in the Ethereum blockchain using the SAND token. Players can create digital assets in the form of Non-Fungible Tokens (NFTs), upload them to the marketplace and integrate them into games with Game Maker.

AXIE INFINITY
Axie Infinity is the biggest Metaverse cryptocurrency that has already attracted more than 3 million active players on the platform. Axie Infinity became well known among other play-to-earn games as a currency that provides a source of real-world income for its players. As of March 2022, Axie Infinity (AXS) is available to trade on numerous exchange platforms, including top exchanges like Binance, Huobi Global, Coinbase, FTX, Bithumb, KuCoin, Gate.io, and Kraken.

Enjin Coin
Enjin Coin has real-world applications and is also laser-focused on the gaming industry. Besides focusing on revolutionizing the gaming space by driving up a player-driven economy, the NFT token also enables the tokenization and subsequent transfer of in-game assets across several platforms. This Ethereum-based network is currently planning on expanding into the heterogeneous network called Polkadot to avoid the high gas fees accompanied by the ETH network.

The Meta Hero
HERO provides a 3D scanning network and sculpting services, and the production of in-game characters. Its 3D scanning technology reconstructs real-world objects, including humans, into ultra-high-definition avatars. They have already decided to upgrade to 16k ultra-HD scanners. It also can be purchased or sold in cryptocurrency.

Star Atlas
Star Atlas is a massively multiplayer online game that takes place in a virtual gaming metaverse. It is being built on Unreal Engine 5, allowing the game to feature cinema-quality, real-time environments. Star Atlas takes place in a futuristic science fiction setting in 2620, where three major factions have emerged and are competing for resources and control: humankind, a consortium of alien races, and sentient androids.

Dvision Network
Dvision Network is essentially a blockchain-based VR content ecosystem, which also powers the NFT marketplace within virtual reality. Dvision Network presents a new virtual reality world, where humanity can lead an affluent life, at the very center of the ICT-based fourth industrial revolution. It is one of the best metaverse cryptocurrencies below US$1 to watch in 2022.

PlayDapp
PlayDapp token (PLA) is a digital asset used within the PlayDapp Blockchain gaming ecosystem to purchase and trade NFT items within games and with the global C2C marketplace ‘playdapp.com’. It is one of the best metaverse cryptocurrencies below US$1 to watch in 2022.