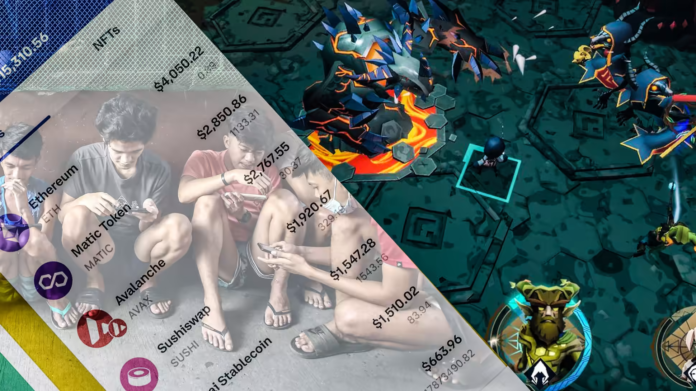 TOKYO — Last year, Australian gaming startup Immutable sold its first batch of digital monsters, pets and warriors — characters with names like Chieftain of the Deadlands or the Exiled Necromancer — based on an upcoming role playing game called Guild of Guardians.

Players would not only be able to take the characters to dungeons to complete tasks when the game launches, but also trade them like collectibles, since they were non-fungible tokens, or NFTs: digital assets based on blockchain technology.

The main buyers were not gamers or crypto enthusiasts from the U.S. or Europe. The biggest was a startup from the Philippines, which plans to lend them out to people who want to play Guild of Guardians.

Yield Guild Games acquired the stash of digital pets and heroes along with a $96,000 “ultra-rare Mythic Guild NFT” that grants its owner special permissions. It was a major stamp of approval for a game that won’t be released in full until at least 2023.

“YGG was one of our closest partners,” said Justin Hulog, chief studio officer at Immutable.

YGG’s business model of buying NFTs and lending them to gamers has helped bootstrap the nascent blockchain gaming industry, and turned YGG into a significant force. Game developers seek out its imprimatur, hoping to get their games an early boost. Venture capitalists have pumped millions of dollars into the business. Some hope YGG could grow to become a powerful gatekeeper to all the virtual worlds now collectively known as the metaverse.

Southeast Asia has become a major market, thanks to a large pool of people lured by the prospects of earning more by playing these games than from their real-life income. Players of blockchain games can earn rewards such as in-game cryptocurrency, which can then be swapped for real money.

Reflecting that geographical concentration, the Philippines is the second largest market for cryptocurrency wallet MetaMask, which is used to transfer cryptocurrency and is popular with blockchain gamers. The U.S. is its largest market, according to its developer, but Indonesia, Vietnam and India also rank among the top 10 countries by users.

YGG runs “guilds” which lend out NFTs to what it calls “scholars,” and these players have to split their rewards with YGG. It recently said its network of guilds has over 27,000 active gamers, more than doubling from December. When Guild of Guardians is released, YGG has said it will bring in up to 1,000 players to get it off the ground. Axie Infinity, considered the most popular blockchain game to date, saw a surge in users after YGG became involved, many of them in the Philippines.

The crypto boom has driven up the value of YGG’s NFTs and the cryptocurrency that it collects from players’ earnings, attracting the attention of mainstream financiers.

Over the past year, YGG has raised nearly $40 million from investors including U.S. venture capital firm Andreessen Horowitz, and launched regional affiliates in Southeast Asia, India and Latin America. A flood of other guilds have followed YGG into the market.

Advocates say YGG is blazing a trail that will soon take it beyond play-to-earn gaming. As the metaverse is increasingly used for daily activities like shopping, working and socializing, it could become a platform for all kinds of commercial activity.

“Yield Guild Games is the future of work,” said Carlos Pereira, Principal at Bitkraft, an early investor in YGG. “It starts with gaming, but we certainly view it as something much broader.”

Large roadblocks are in the way of that futuristic vision. The blockchain games’ growing dependence on guilds is a reflection of the reality that many participants are flocking to games for financial reasons, rather than for the quality of the game itself. Skeptics question the sustainability of the games if players cash out their earnings and don’t spend money inside the game. A decline in the value of in-game cryptocurrencies could quickly lead players to desert.

“It seems like a steppingstone,” John Henderson, partner at Australian venture capital firm AirTree Ventures, said of the current crop of play-to-earn games. “For blockchain gaming to really work, the games themselves need to stand on their own two feet and be equally compelling as games on other platforms.”

YGG is barely 18 months old. Its co-founder, Gabby Dizon, a veteran in the Philippines mobile gaming industry, was an early NFT collector and began playing Axie Infinity, in which players breed and battle digital pets called Axies, in 2019. As the game’s popularity grew, he began to lend his Axies to players who couldn’t afford to buy their own.

He partnered with Beryl Li, a fintech entrepreneur, to turn the operation into a business. “In October 2020, after seeing how this lending model — or what we now call ‘scholarships’ — helped Filipinos create another source of income during the pandemic from doing something they enjoyed, Gabby came up with the idea to create a global network of players who could help each other get started with NFT games,” Li said.

YGG’s business model addressed some key bottlenecks in blockchain gaming. Despite the buzz around cryptocurrency and NFTs, most gamers have been hesitant to spend money in an industry where hacking and fraud is rampant. Some $4.5 billion of gaming NFTs were traded in 2021, according to an industry report by analytics site DappRadar. That was one-fifth of all NFT sales but a fraction of the $180 billion in gaming revenue generated across PC, mobile and console-based games.

YGG gained momentum from changes in Axie. In 2021, the game’s Vietnam-based developer Sky Mavis rolled out its own blockchain called Ronin that let users trade NFTs and cryptocurrency without paying hefty fees for using the Ethereum blockchain, making it easier to transfer the digital pets to other players.

By December, YGG had expanded its investments to a portfolio of NFTs and cryptocurrencies across more than 48 games and other projects. As well as Guild of Guardians, they include space-based role playing game Star Atlas and Cyball, a football-themed game where users can trade characters as NFTs.

By becoming a major buyer of digital assets, YGG has helped get little-known titles off the ground. It has then played the role of an advertiser by promoting the games to their followers on social media services like Discord.

“The whole model of guilds and how it overlaps between influencers and investors and overseeing players, in many ways, was pioneered by them,” said Hulog of Immutable.

YGG has also seeded other lenders in India and Southeast Asia that aim to build local versions of its business. Li said these are “tailored to address onboarding challenges in their local market and ensure that language-specific content, education and support are made available” to gamers.

The number of rival guilds has mushroomed. Most of them are considered small operations run by individuals but some, such as Australia’s Avocado and Vietnam’s Ancient8, have raised venture capital funding. Philippines-based Merit Circle said it raised more than $100 million in a token sale last year.

“If you think of a metaverse as a new virtual country, then [play-to-earn gamers] are the new immigrants,” said Simon Kim, CEO and managing partner of South Korean venture capital firm Hashed. “The opportunity for people in places like Southeast Asia is bigger, because the salary levels of developed countries are already high.” Hashed has invested in YGG’s Southeast Asian affiliate as well as other guilds in Vietnam and Australia to fund gamers.

The decline in the value of many cryptocurrencies and NFTs will put YGG’s ambitions to the test. A Singapore-based lawyer that advises guilds says many people switched to other games when the value of Axie’s in-game cryptocurrency, Smooth Love Potion, declined last year. “So there was a period when guilds held NFTs but did not have borrowers,” the person said. YGG said its scholar numbers have continued to increase despite the decline in the price of SLP.

A bigger shock rocked blockchain gaming last month, when the developer of Axie Infinity, was hit by one of the largest-ever crypto heists. Hackers stole more than $600 million worth of cryptocurrency by taking control of the “bridge” where cryptocurrency is transferred into or out of the game.

YGG said it “has not been significantly affected” by the heist. As Axie Infinity’s developer, Sky Mavis in Vietnam, scrambles to improve security, it has become harder to get money into and out of the game, but YGG said the cryptocurrency that it currently cannot withdraw was intended to be kept within the ecosystem anyway. The prices of the two cryptocurrencies related to Axie Infinity, AXS and SLP, have declined 26% and 16% in the two weeks since the hack was announced, according to CoinMarketCap. Trading of NFTs on Axie Infinity this month is tracking significantly behind pre-hack levels, according to CryptoSlam, totaling $9.4 million so far, compared with $32 million in March and $848 million during its user growth spurt in August 2021.

Relying on guilds can be a double-edged sword for game developers. The large presence of play-to-earn gamers means developers will constantly have to provide attractive returns or risk losing them to other games. The developer of Axie recently scrapped plans to increase fees for transactions on its marketplace, where users trade digital items, after strong pushback.

But he warned that while guilds can be early users, they can also be quick to leave. “Guilds help create buzz in a game. But if the guilds become ‘swarms of locusts’ — eat all the tasty parts and move on to the next target when it is gone — then games will die. That is my biggest concern.”